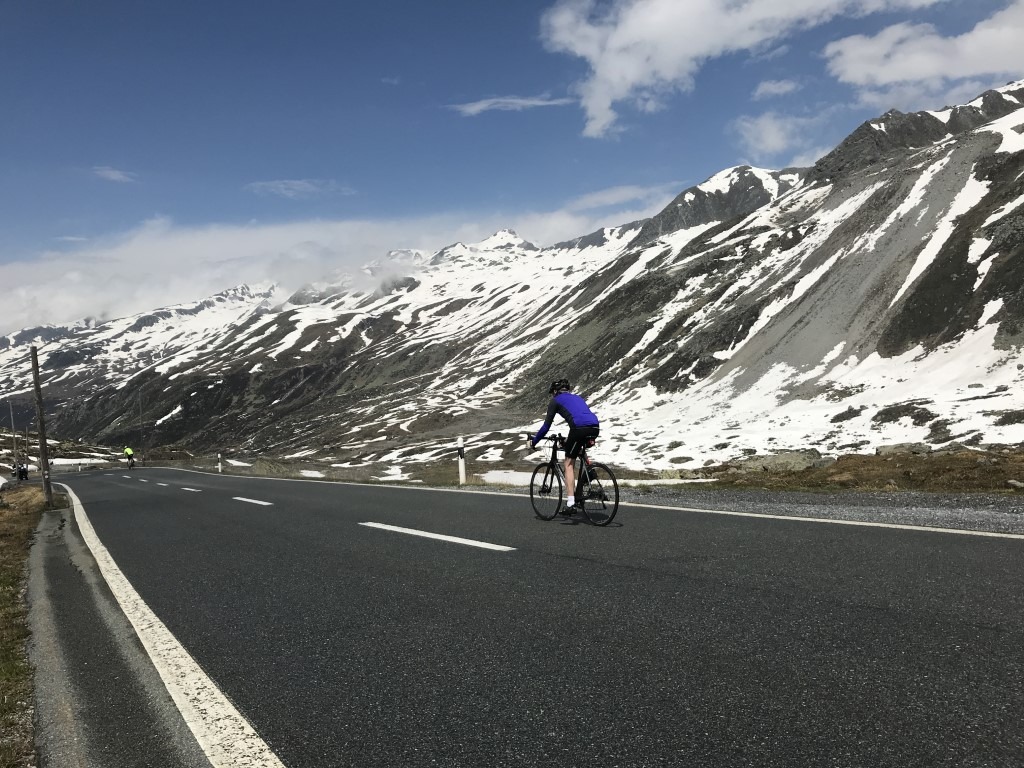 I had to drive out to Klosters in mid June with a bit of kit and to run a couple of small errands. It wouldn't have been worth the effort if I was not obliged to go. I then alighted on the brainwave of suggesting to a couple of friends, Jonathan Botting and Ed Kilwick, that they fly out to join me for a bit of cycling; as I was driving I could take their bikes.

We set out from the Wynegg after breakfast in gorgeous sunshine and headed up in the direction of Davos. I remember my father telling me that when he was a boy that this road made the best sledge run and it wasn't hard to see why. Unfortunately we were going up it and not down! I hoped that we were not biting off more than we could chew as the plan was to continue from Davos to the Fluela Pass, which at an elevation of 2383m was some 1200m higher than Klosters. The great thing was that we were under no time pressure and we soon settled into a steady (albeit slow) pace. After resting our legs for a moment at Wofgang (and childishly taking photos of ourselves trying to fill up our bikes with petrol at the fuel station) we headed on past the lake of Davos and then turned left towards the pass. We soon emerged from the forest into a wide and beautiful valley, at which point the air started to get colder and the cloud thickened. It started drizzling 200m from the little restaurant at Tschuggen and by the time we got there it was torrential. A perfect excuse to stop for a coffee! Thankfully it was only a shower and when we set off again it was dry all the way to the top, and the ride was made more dramatic by some swirling cloud and snow on the side of the road. As we had a much needed drink and lunch the Fluela-Hospiz we encountered a very entertaining and somewhat crazy bunch of Muslims from the UK on a cycling pilgrimage to Mecca. Some of them had never ridden a bike before starting on their trip.

As we set off after lunch the sun came out and it was all downhill! We got back to Davos in double quick time and decided as their was still plenty of time that we would to a detour to the other side of Davos and cycle up to the little village of Monstein, home of the highest brewerey in Europe. Naturally as we sat out in the sun in a charming little restaurant in the middle of the village we had to indulge in the local beer! As we cycled back to Klosters we were beginning to feel our legs and it was a great relief that the final few km back to the village were all downhill.

Having cycled up to Davos the day before we saw no point in doing it again and so took the train instead. As we took the bikes out of the shed we discovered Jonathan had a puncture which put a little bit of pressure on us catching our train, which fortunately we did but with little time to spare. We started our cycle ride from Davos Platz and headed out down the valley towards Wiesen. It was another warm day and the roads were not busy at all. In fact the only heavy traffic we came across was a herd of cows being driven down Wiesen high street! We carried on through stunning little villages, and down in the valley below us we could see some of Switzerland's finest railway engineering, including the iconic Wiesen Viaduct. Pretty soon we found ourselves in Lenzerheide where we stopped for a coffee and then had the most incredible descent down to the regional capital of Chur, some 900m below us. We then had lunch a few km beyond that at the Alter Torkel in Jenins, in the heart of the Graubunden wine region.

Unsurprisingly we had a very good lunch... perhaps too good because when I offered the option of taking the train back to Klosters, everyone was very forceful in their decision to cycle. In fairness, a lot of the cycling along the Prattigau Valley beck to Klosters is flat, and as cyclists are not allowed on the main road, the alternative cycle road is completely quiet and a delight to cycle on. Of course it is not all flat and the road between Kublis and Saas felt to us like the climb to Alpe d'Huez does in the Tour de France; the main difference however is that in the Tour de France they don't stop half way up to take photos when they get tired!

This was a brilliant day's cycling and after 70.5 miles we fully deserved our burgers in Bear's Bar that evening!

The forecast was not that promising with rain expected around 1-2pm. We therefore decided to have a slightly earlier start as a result, which suited quite well as Jonathan and Ed had to catch a late afternoon train to catch their flights back to London. We were also joined by another friend of mine, Will, who had come over from Grimentz in the French speaking part of Switzerland. We set off after checking out of the hotel and headed down to Kublis and then turned up to the right towards Pany and then St Antonien. I think it is fair to say that this was the steepest road we went up in the whole trip and after 2 days of cycling proved particularly hard. Will on the other hand who cycles all the time in Switzerland shot up like a mountain goat! From Pany the road flattened out which was a huge relief and we carried on along the valley to St Antonien (those who ski off piste in Klosters might know this little village) for a very welcome drink. The end of the road was higher up at Partnun and we reached the top we knew that it was downhill all the way back to Kublis. The plan had been to have lunch here but given the weather forecast we decided it would be more prudent to have lunch closer to home. We headed down and after 5 minutes the Heavens opened. By the time we reached Kublis we were soaked! The cosy Bahnhof Stubli provided welcome respite from the elements, and an excellent lunch! Given our soggy disposition we elected to take the train the short ride back to Klosters. As we got back into the village the sun was out and there was not a cloud in the sky. That's mountain weather for you!

I recorded all 3 days on Strava and if anyone wants to delve more closely into what we got up to then you click on the following: day 1, day 2, day 3.