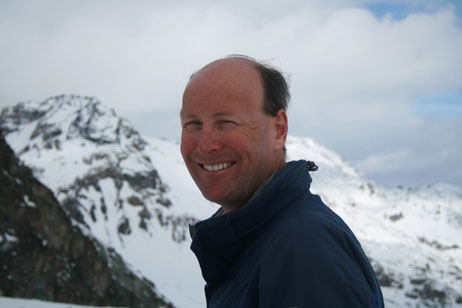 James Palmer-Tomkinson has a love for Klosters which goes hand in hand with his love for skiing. He is passionate about both and has never needed much of an excuse to find his way back to this picturesque part of Switzerland over various stages of the winter. With that in mind it came as no surprise to those who know him that he turned his back on the world of finance and in 2010 together with his wife Sos launched PT Ski. James has come to Klosters at least every year since he was four years old and prior to PT ski has introduced many of his friends to this charming resort, looking after them in much the same way that he now looks after his PT Ski guests. He also started up and ran children’s ski weeks for a local English ski club, the perfect precursor to the highly successful kids weeks that PT Ski now run.

James has a strong skiing pedigree. His grandfather James “Jimmy” Palmer-Tomkinson, was British Champion in 1939 and competed in the Winter Olympic Games in Garmisch-Partenkirchen (1936) and St Moritz (1948). It was in Klosters, in 1938, that Jimmy met Doris Friedreich, the Swiss and nearly World Ski Champion, whom he later married. The couple’s three sons – Charles, Christopher and Jeremy – and daughter Sarah were to perpetuate the Palmer-Tomkinson domination of British skiing into the next generation, though sadly Jimmy never lived to see this. Aged just 36, he was killed in 1952 while practicing for the downhill event during British Racing Week in Klosters. Had he lived, Jimmy would have captained the British team in the Winter Olympics held that year in Oslo.

Jimmy’s eldest son, Charles Palmer-Tomkinson, James’s father, won the British Ski Championships in 1961 and competed in the giant slalom and downhill events in the 1964 Winter Olympics held in Innsbruck. Charles, like his father raced above all for fun, with downhill being his preferred discipline. However, it was said at the time that it would be ‘improper’ to regard Charles only as a downhill skier as his love for off piste skiing made him a ‘complete skier’. 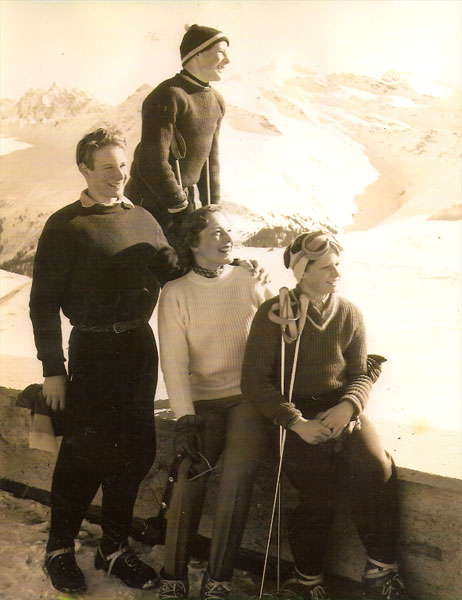 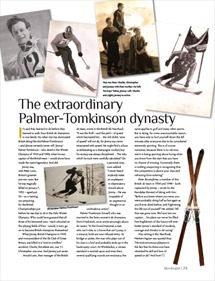 In the 1962 British Championships Charles came second to his younger brother Christopher, making it the first occasion that brothers have finished first and second in this competition. In 1965, in Val d’Isere the youngest Palmer Tomkinson brother, Jeremy, became the fourth Palmer-Tomkinson to be British Champion and in 1968 competed in the Grenoble Winter Olympics. He was also a ski stunt man in the James Bond film “On her Majesty’s Secret Service”.

The Palmer-Tomkinsons were self trained, having learnt to ski almost before they could walk. Their ‘school of skiing’ was based on the doctrine that ‘the proper way to train for racing is to ski for fun’. This philosophy has now been adopted by James in the way that he approaches all aspects of PT Ski. Skiing is for fun!