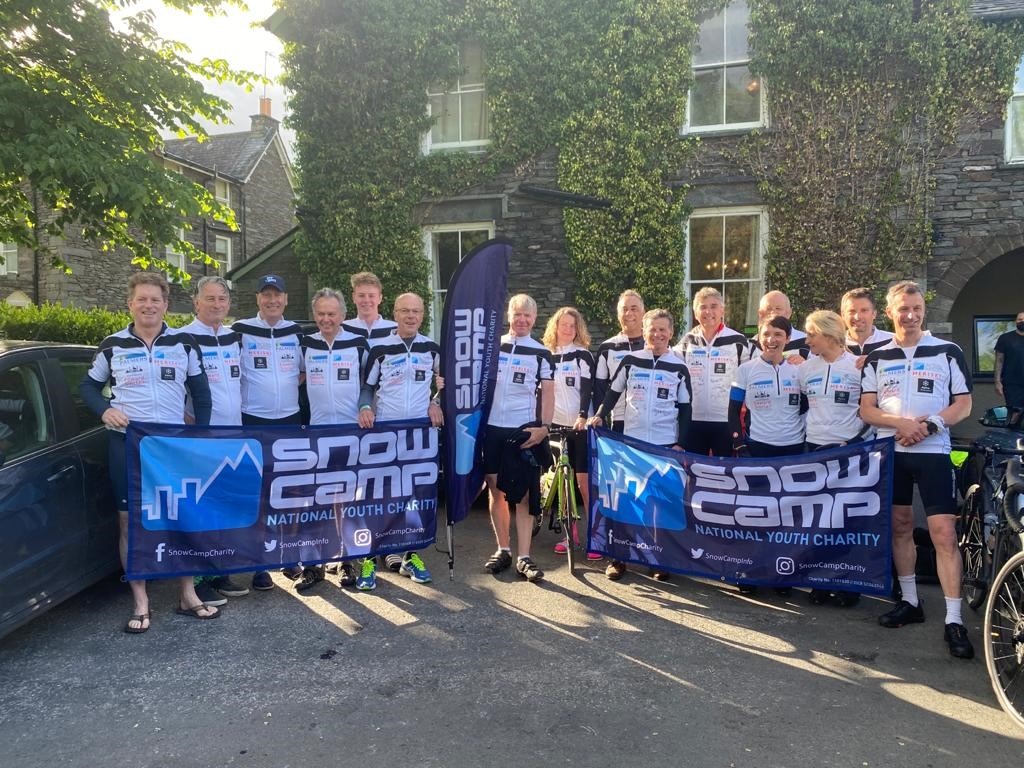 Last winter was PT Ski’s 10th anniversary. To mark the occasion we thought that rather than celebrating with a party we would instead take the opportunity to fundraise for Snow-Camp, with the idea of raising enough to support 10 young people through their program. Snow-Camp has resonated with us ever since we first came across them a few years ago, using the sport that we are passionate about to make life changing differences for young people.

The challenge we alighted upon was a cycling one, but the team were all skiers. A quick internet search told us that the Fred Whitton Challenge in the Lake District was one of Europe’s toughest sportives and so we somewhat boldly, and perhaps rashly, decided to base our route on that. With 115 miles to pedal encompassing nearly 12000ft of ascent, and Britain’s hardest climb (Hardknott Pass) coming after 90 long miles we knew training would be essential. However it is fair to say that London and the Home Counties do not quite have the topography to mirror what was in store and our 40-80 mile rides around Hampshire, Berkshire and the Surrey Hills lulled us into a false sense of security. Two weeks before the ride a few of us had a very hilly (and wet!) day in Dorset which was the wake up call everyone needed and this precipitated a dramatic and much needed escalation in our training regimes. There were genuine concerns that some of the team might not make it round the course.

I was joined in this endeavour by 15 other cyclists (and 8 supporters) and we checked into the gorgeous Victorian House Hotel in Grasmere the day before the ride; Grasmere being the start and finish of the ride. There was nervous anticipation at dinner and it was noticeable that several were not touching beer or wine!

The following morning we had a team photo at 7.30 and then headed off in small groups of 3 or 4 riders, with my cohort being at the back. The weather was on our side and we were in good spirits as we headed through Ambleside and alongside Lake Windermere. Then the uphill was upon us as we headed up and over Kirkstone Pass and we knew the challenge was on! Next up was a more sedate (everything’s relative!) Park Brow which headed up from the shores of Ullswater and then through Keswick, past Derwent Water and on to our first big test, Honister Pass. Out of nowhere the benign road turned into a 25% monster, sapping our energy and resolve, the smell of burning rubber from a recent passing car lingering in the air.

On the other side of the pass, as we approached Buttermere, our lovely support team were waiting for us with much needed sustenance, cold drinks and moral support. The rest was brief and we were soon heading up Newlands Pass (where I got a puncture!) and its fearsome 25% final right turn. The scenery was stunning if we cared to look at it. Whinlatter Pass followed and then Cold Fell before we pulled in at Gosforth where the support team had sausage rolls and energy bars ready to prepare us for the most brutal part of the ride. Bodies were aching, it had been physically draining, we had done 80 miles and we knew Hardknott Pass stood between us and the finish. It showed no mercy. One of the team encountered severe mechanical failure with her crankshaft between the pedals snapping with the force of pedalling (sadly meaning the end of her ride). I toppled over near the top after stopping to allow a car to pass. One way or another everyone made it over and then had to navigate the terrifyingly steep descent on the other side. I remained at the top waiting for two of the team who were dealing with a puncture at the bottom, but with no mobile signal I couldn’t get any updates and in the end I had to rely on the support team to make sure that they were ok. I carried on solo for the remainder, over Wrynose Pass, then Blea Tarn and thankfully the last 25% gradient sign. Then it was a gentle cruise back to Grasmere where beer and pizza were waiting, as well as most of the other riders. Everyone was elated at their achievement, for nearly all of us this was the biggest ride we had ever done. The last 2 riders came in about half an hour after me and I would love to say the party went on long into the night, but that is not what happens when you have just cycled at the limit for nearly 10 hours!

As a ps, I just want to pay tribute to our amazing support team – Sos, Edwina, Julie, Joanna, Anna, Carey, B and Lizzy, they were amazing, plying us with drinks and energy bars around the course, cheering us up hills and rescuing us when we had problems. Without them we just would never have got round. I also want to thank the Victorian House Hotel who have kindly helped sponsor the team, and also Meriski and Alpine Answers who have also both supported and rode in the challenge.