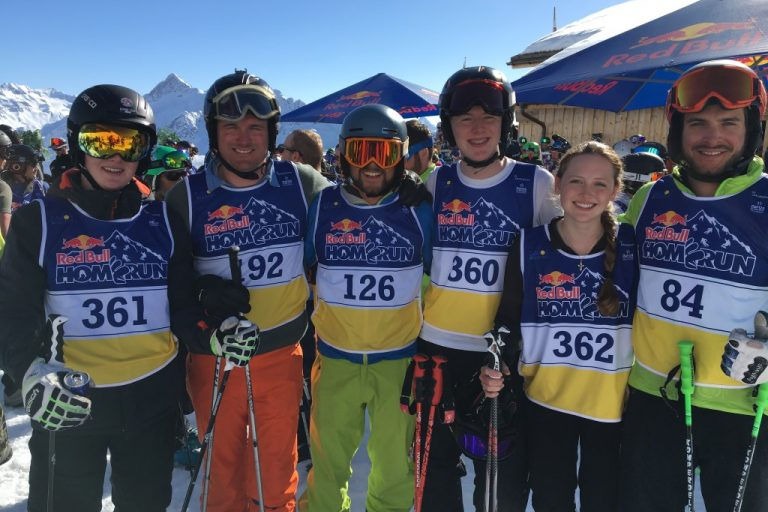 The Red Bull Home Run is surely one of the craziest races on the planet. However, with the event right on our doorstep the temptation to take part was just too much and I can safely say that if this becomes an annual event (which the team at Destination Davos Klosters very much hope it will) I will certainly be back in the starting line up next year as it is also without a doubt one of the most fun races I have ever done.

The concept of the race is extraordinarily simple as everyone starts at the same time and the first across the finish line is the winner. That seems to be stating the obvious but with 400 people in the starting line it is easy to discern the lunacy of it all. In a moment of sanity they introduced a Le Mans style start to spread the field at the beginning but otherwise it is a complete free for all.

The Red Bull Homerun has been running for some 10 years in various resorts around the world and they expanded the franchise this year to include Davos. The Event was held on the Jakobshorn with the start at Jatzhütte at the top of the mountain and the finish some 6.5km below in Bolgen Plaza in the town. In between they had marked out the course with gates and blue paint to ensure everyone followed the correct piste. As I inspected the course I was pleased to see that they had put in a couple of controls on the two steepest parts of the course just to slow things down a fraction.

The race was held on the Saturday after Easter and the weather could not have been more ideal. The skies were cloudless and sunny and there was a real end-of-season party feel in the air. As I was a bit anxious about how the race would unfold I had deliberately not signed up my children to take part, but as I turned up to collect my number we discovered that it was not too late to enter. I have never seen chf50 leave each of India’s, Sam’s and Wilf’s wallets as fast as I tried in vain to object.

The start time for the race was 5.30pm. We headed to the start in good time and laid out our skis in the start area. Then we ambled over to Jatzhütte to lie in the sun and relax. There was a great atmosphere and some splendid outfits on display including a couple of Mario Bros, some dinosaurs and a colourful array of comedy wigs. We made a mental note that next time we would do it in fancy dress! In fact the only type of outfit not in evidence was a catsuit as these were forbidden in the very short list of rules.

At 5.15pm we were all invited to line up on the start line, some 150m from where our skis were waiting. One could sense the atmosphere changing from care-free party to nervous anticipation. A drone flew overhead. AC/DC’s Highway to Hell blared out of the loudspeaker. Then the 60 second countdown started…three…two…one…GO! A melee of 400 people started sprinting up the slope. There was no discrimination here, snowboarders mixed with skiers, men with ladies, the race was on. It was first to the bottom.

I clicked into my skis puffing hard from the exertion. It was an exuberant madhouse of chaos as skiers and snowboarders departed like a swarm of bees while others ran around like headless chickens as they couldn’t quite remember where they had laid their skis or snowboard. I didn’t care, I was off, straight into the tuck. The top was a rush where the wide piste afforded plenty of space and then there was a sharp left hander concertinaing the field into a steeper section. There was a guy on twintips right in front spitting up an indecent amount of slushy now into my face, and a snowboarder on my right who I was convinced was going to cut me up at the next corner. I had to keep my composure as I approached some rollers at high speed. I took air and landed in control. There was carnage ahead. Two skiers had crashed! Skis and sticks were everywhere, the skiers were ducking for cover, I had to jump over one of their skis to avoid joining them in the snow.

On I shot, weaving and praying, holding on and hoping. Carving through the slush, tucking on the flat, adrenalin was coursing through my veins. Skiers to the right, snowboarders to the left, on we charged. Evidence of crashes littered the piste. Into the forest we went with its sequence of switchbacks and then calm suddenly ensued as I found myself on the long flat path which traversed round the mountain to Davos. I saw India and Sam up ahead (I had forgotten about them!) and I skated for all I was worth on the soft slushy snow to nip past them. Then I was into the last slope down to the finish line, tucking alongside 2 or 3 others, a final flourish before skidding to a halt, exhilarated and mightily relieved.

Wilf was already down and India and Sam came in shortly after me. We had all made it. No one was harmed and there was no shortage of tales of near misses. It was a completely bonkers race but so much fun! We will definitely be back although in the interests of self preservation a more sedate descent in fancy dress somewhere near the back might be in order!