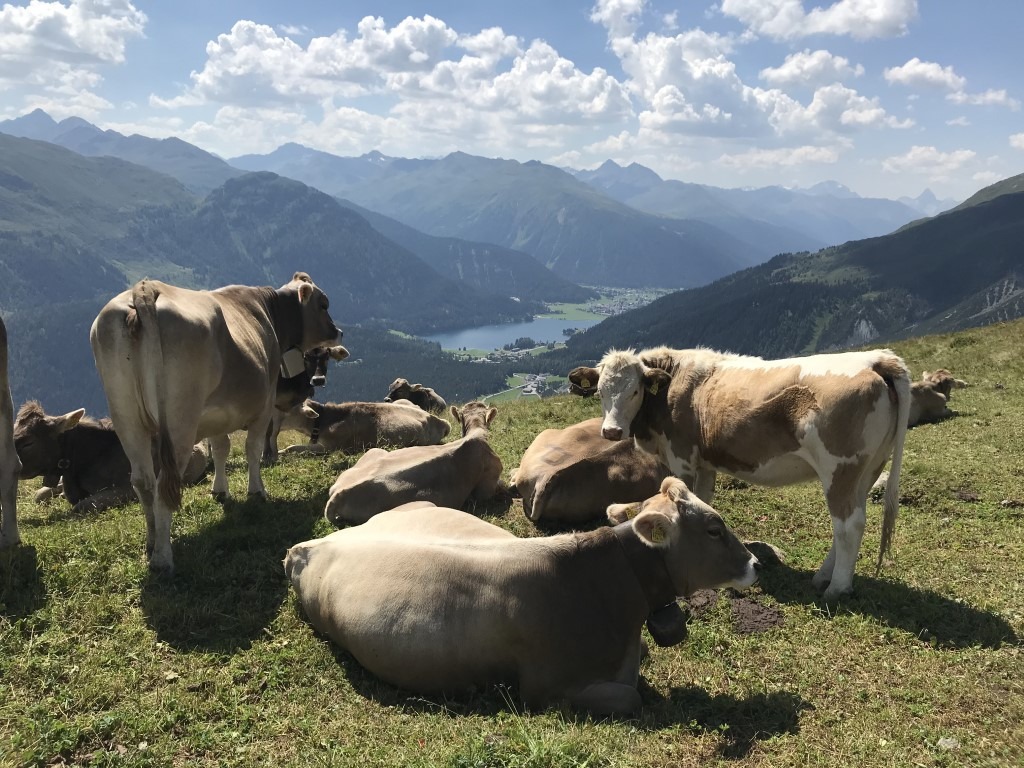 After several years of not having a summer holiday in Klosters we made a welcome return this August. We were blessed with amazing weather and the one gloomy day resulted in glorious snowy peaks the following morning. With limited travelling options we also found ourselves with all 4 children (now aged 18-23) which was a massive bonus.

Typically, there was the normal range of activities that we have always done. The near daily pilgrimage to the outdoor pool after mountain exertions had been completed was as pressing as ever. There were barbecues and picnics in secluded spots by rivers and lakes. We played volleyball, tennis and crazy golf, and went for nice walks on the Gotschna and Madrisa. Suffice to say, it was all pretty idyllic.
When something is so familiar it is very easy to gravitate to the tried and tested without broadening the horizons, but we made a determined resolution not to fall into this trap.

The first new thing we did was the adrenalin fuelled summer sledge run at Churwalden. At 3km long and with a vertical drop of some 480m this is the longest such ride in Switzerland. It was awesome! We rode in pairs (you go faster than if you are by yourself) and by the second run everyone had dispensed with applying the brakes until the very end. This is something we will be doing again!

Road cycling has become more of a P-T pastime since we were last in Klosters and we drove out with bikes on the roof to tackle some mountain passes. After a couple of warm up rides in the Prattigau valley (the valley Klosters is in) we were ready for the big ride. We took the train to Davos Platz and headed out on our bikes through the charming villages of Wiesen, Schmitten and Alvanau to Filisur which is where the downhill ended. Our goal was the Albula Pass (2315m), now some 1300m above us! The climb was spectacular but relentless. We had a welcome pitstop in Bergun and as we headed on we could not help but admire the remarkable engineering of the railway with its intricate loops of tunnels and bridges which criss-crossed around us on the way up to Preda. The mountain scenery was stunning and it is no surprise to see why they chose to make this area a national park. Up we crept past the pretty lake Palpuogna and into wilder, more exposed terrain, until we eventually topped out at the summit for a well earned lunch.

Needless to say the ride down the other side towards St Moritz was exhilarating and liberating. At the bottom we headed left and down a long wide valley to the start of part 2 of the day: the Fluela Pass (2383m)! The climb starts at Susch and thankfully from here it was only a mere 945m vertical to the top. I would love to say that we did it at a steady metronomic pace in one go, but our legs were getting the better of us and as we neared the top the rests became more and more frequent. At least we had the promise of some 1200m descent to Klosters on the other side to look forward to! You would have thought…

As we reached the top the clouds had thickened and it was starting to rain, and as we started on the descent it had turned into an unforgiving torrential downpour, which occasionally gave way to hail. It was miserable and by Tschuggen we were soaked to the skin (cue a hot chocolate stop!). The storm never let up and another drying out session was needed as we reached Wolfgang, before we eventually made it back to Klosters. It had been a proper adventure.

The final new thing we did was to spend a night at the Vereina Hut. We walked in from the Wagerhus on the way up the Fluela Pass and with fresh snow on the peaks it was a glorious hike. As we went over the Joripass there was snow underfoot which felt a little strange for August, and the lakes that greeted us as we descended into the Vereina Valley were crystal clear. It was not hard to find a beautiful spot for our picnic.

We reached the Vereina Hut at around 4pm and tucked into some quenching beers. For those unfamiliar with the Vereina Hut it is owned and run by the same family that own Gotschnasport, and although I had been there before this is the first time that I was spending the night there. You can actually take a taxi up there and as it happens it all turned into a bit of a party, as we were joined by my cousins and their small children who had taken advantage of the road. We ended up in one big dormitory of 16 and the smaller children were suitably overexcited, such that sleep was not really on their agenda! Fortunately there was a very nice table outside and plenty of red wine to distract us until the giggling had made way for snoring.

The hike the next day was new for us and took us over the Vereina pass and through some of the most remote terrain in the region. The views were again stunning and we hardly saw another soul. It was like we had been magically transported into the set of Lord of the Rings. As we descended evidence of civilisation started to become more apparent until we finally arrived at the end (Lavin) where we took the train through the Vereina Tunnel and back to Klosters.
Our 2 weeks rattled by and it had been fabulous being away from the constant news about Covid and all the restrictions that that entails. We even managed to make it back well before the UK government imposed quarantine restrictions on those coming into the country from Switzerland! 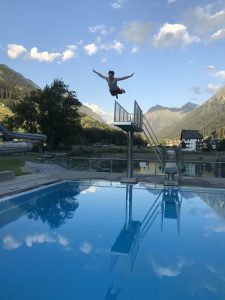 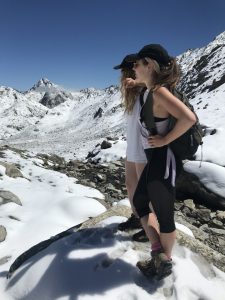 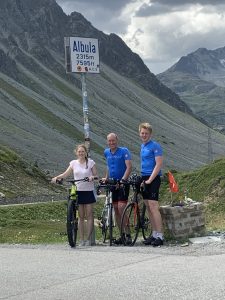