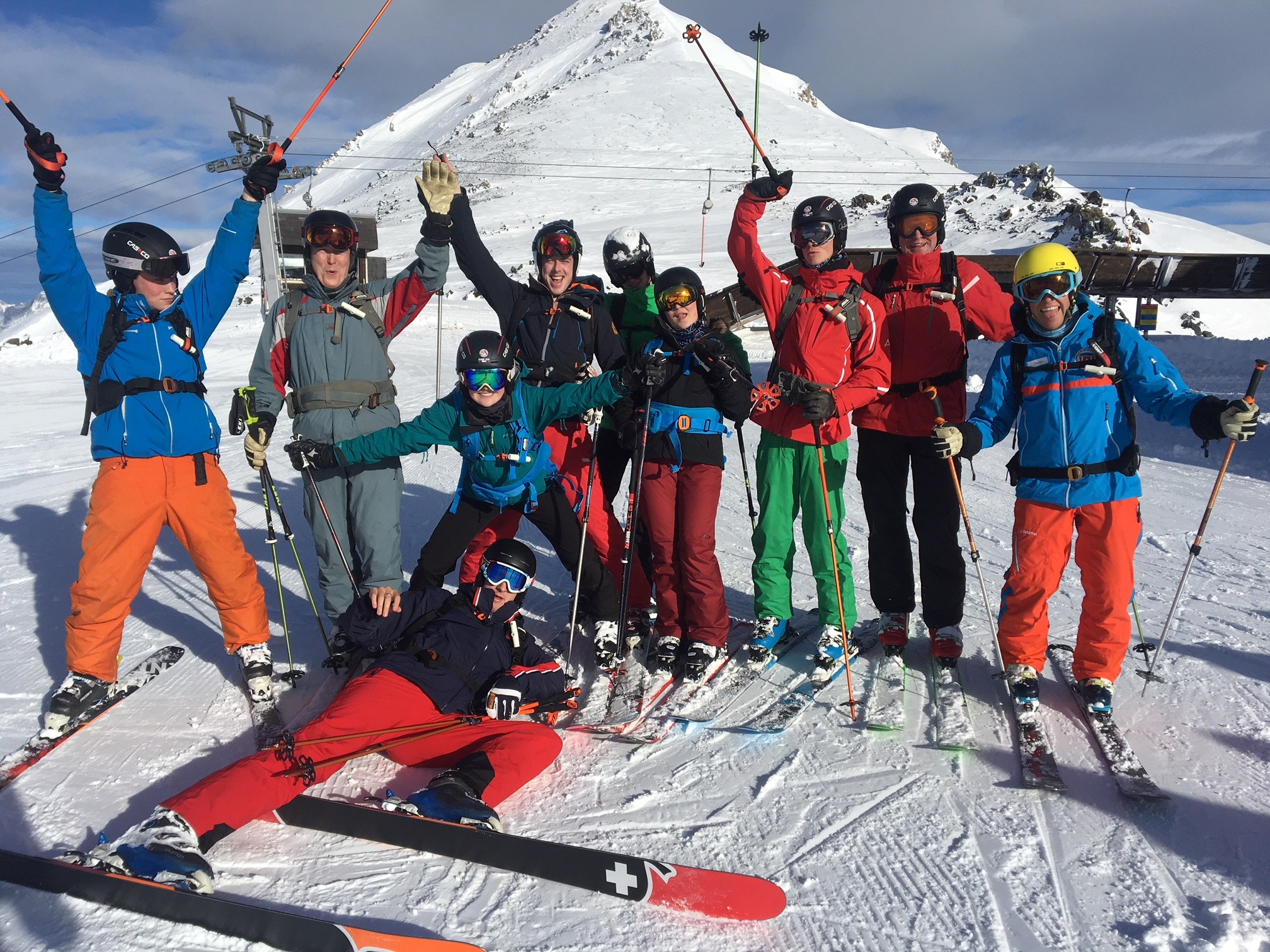 The inaugural 2050 Club weekend has just finished and it was a great success. We were blessed by wonderful conditions with three sunny days and powder on the upper slopes. The idea behind The 2050 Club is for those in their early 20s to come to Klosters with a parent (typically in their 50s) for a fun weekend of off piste skiing. for this first trip we had a party of 14, some of whom knew each other already and others who were new to everyone.

Typically for a group like this everyone found their way to the bar within nanoseconds of arriving on the Thursday evening and it was quite an effort to get the group to move on to Al Capone for a relaxed pizza before the restaurant stopped serving. It was extremely jolly and the team did well to all make it to Gotschnasport on time the next morning to hire kit and meet our off piste guides.

There had been a lot of snow over the previous 24 hours while the temperature had also risen sharply, meaning it was avalanche risk 4, so a day to take it carefully. Our guides Snoopy, Thomas and Selina did a great job of finding us good snow for us to make fresh tracks. The group split roughly into the 20s and the 50s, with the latter proving the first to crack and head for a mid morning coffee and beer. We all met up again for a late lunch at the excellent Alte Schwendi and we finished the skiing with a leisurely run down to Klosters, and the enticing sight of Gaudy's which proved the perfect pit stop before heading back to the hotel. Dinner was again a low key but fun affair at Wim's Adventure Hostel which does a very good value cheese fondue. The day was rounded off with a cleansing ale in the Cresta Bar.

Bleary eyes and hangovers on Saturday morning were cast aside as we headed up the Madrisa and into fresh snow sparkling under cloudless blue skies. This time we split into groups based on families, and as we were all on a similar bit of mountain it was very easy to see what everyone was getting up to. There were one or two novice off piste skiers amongst the assembled and it was pleasing to see them start to find their rhythm.  There was plenty of space to enjoy fresh tracks all morning and eventually we settled into the charming Erica's by the lake for a well deserved late lunch, beaming smiles etched onto everyone's faces.

That evening we met for drinks at the Hotel Alpina before heading off to the Sonne where proprietor Simon looked after us immaculately well. Honor P-T who had organised most of the weekend had arranged with him a set menu with a choice of Cordon Bleu or Zuricher Geschnetzelles and rounding off with a Coupe Denmark. We then all had to try his raspberry vodka (which was delicious) and we stayed in his stubli until the small hours; only the hard core made it from there to the Casa Antica nightclub.

Sunday was our last day and we had to head to the airport around 4pm, so in a moment of bravado the night before the vote was unanimous in favour of an early start. We were up the mountain shortly after 9, a feat which would have attracted long odds at any reputable bookmakers. We mixed up the groups again, but still basing it on families, and did so again at the now mandatory coffee break, so everyone got to ski with everyone else by the end. Conditions were a bit more testing after a bit of wind in the night, but our guides still managed to find us good skiing. Some even endeavoured to ski down through the trees at the end to near the bottom, which proved quite ambitious! We finished skiing around 2.30pm with tired legs and inane grins all round. A slightly cavalier attitude to timing was adopted in the pizzeria and wheels started rolling towards the airport just after 4.30pm.

Nearly everyone was on the same flight home and the airport saw plenty of photos being swapped and stories being embellished. We had managed to pack in a lot over 3 days, both on and off the slopes. It had been a party from beginning to end. For my part, I loved having some quality time with my eldest daughter Honor who is in her last year at university, and I think that all the other parents felt the same. For those in their 20s, they enjoyed being part of the gang and having great skiing, although in some instances they could probably have done without some of the embarrassing "Dad dancing". The 2050 Club will definitely be back January 2019.