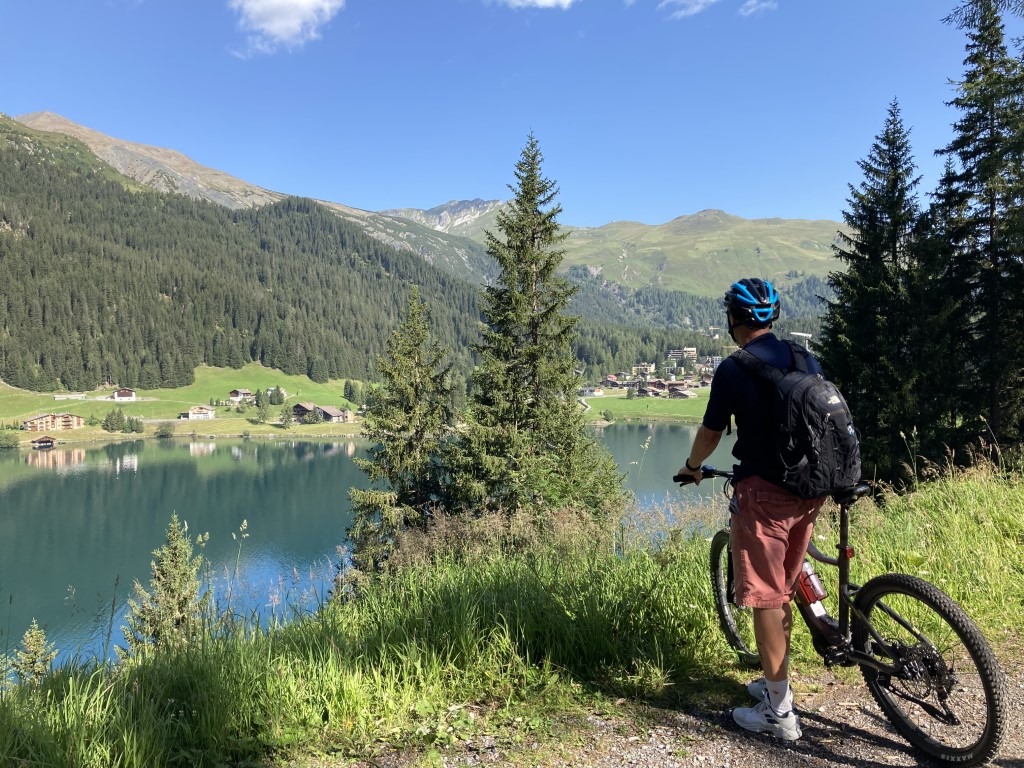 E-biking in Klosters, by James P-T

I was in Klosters for 2 weeks in August and decided to take the opportunity to try out an E-bike. For those unfamiliar with the concept, these are bikes which come with a rechargeable battery that give assistance when you pedal. I, together with my daughter India, hired E-mountain bikes for 3 days and they came with 4 levels of assistance, Eco, Tour, EMTB (I think that stands for E Mountain Bike) and the very desirable looking Turbo. The caveat of the 4 options was the greater the assistance the shorter the battery life; we had been warned!

To warm up and get the feel of our new wheels we headed out of Klosters down the valley, following the picturesque river Landquart through the little villages of Serneus, Saas and Kublis. There was little need even to engage our batteries as it was all downhill. From Kublis however the serious uphill began as we headed up to Fideris and on up to the Fideriser Heuberger Hutte, some 1000m vertical above Kublis. This certainly put the bikes to the test and although not steep, it was relentless. This was not a time for Eco and I climbed in a combination of Tour and EMTB, resisting Turbo as I feared the battery might run down on me. The scenery was completely stunning and the road mostly tarmac making for very easy riding. In the winter buses service the route taking passengers to the small ski station at the top, while the road also serves as one of the longest sledge runs in Switzerland for the adventurous on the descent.

When we got to the top we headed into the restaurant Arflina for a much needed drink, and we were delighted with cold damp flannels they gave us as we went in. There was not a cloud in the sky and we were definitely warm when we got to the top! We needn't have worried about our batteries either as there was also a recharging point at the bike stand. Then it was time for the down and it was great fun cruising what we had just ascended, with wind in our faces. Back down in Fideris we headed through Jenaz and Schiers to the end of the valley where we entered one of the main wine growing regions of Eastern Switzerland. We met friends for lunch at the Alter Torkel restaurant which is run by the local wine growers association. Curiously their menu is more of a wine list, with selections of starters, main courses and deserts that you might like to choose to accompany them. Needless to say we made sure to try the local produce!

Our second adventure saw us head the other way out of Klosters up an unpaved road through the forest to Laret Station and then we braved our first single track path. Our handling skills had certainly been enhanced on the first day and the steeper sections were easily overcome in Turbo mode! In fact it wasn't a long ascent and after Wolfgang we circumvented Davos Lake to the East enhancing our single track skills. We then headed through Davos and after Monstein Station ended up on the old horse and card road which meanders through the valley. We had full sight of the fabulous Swiss railway engineering with the railway crossing chasms and darting into tunnels. In fact our road also had its share of tunnels carved out of rock which was great fun. Eventually our road veered back to civilisation but we turned off onto a single track path to stay in the valley, which soon became a gorge that dropped steeply below us. It was a stunning route. At Wiesen Station we then had to dismount to cross the iconic Wiesen rail viaduct where it was best not to look down and then we enjoyed a lovely single track path (with Turbo definitely used on the up!) before ending up in the pretty hamlet of Filisur. From there it was an easy train ride back to Davos and then back on the bike as downhill all the way to Klosters!

For our final foray we were joined by 4 other friends and had an earlyish start as thunderstorms were forecast for the afternoon. We headed up the mountain through the woods to the bottom of the Schifer (better known as the blue bubble) on a nice wide vehicle track and then had an amazing descent all the way down to Kublis. From here we went down the valley to Schiers via a very nice hot chocolate stop in Jenaz. A few km above Schiers is the Salginatobel Bridge, a three-hinged arched bridge designed by Swiss engineer Rober Maillard and build out of reinforced concrete in 1929-30. It has been declared a World Monument and was definitely worth the visit. On the way back to Klosters we traversed the other side of the valley going through another array of picturesque villages. At Kublis I considered jumping on the train home as my battery was now a little low, but I reckoned I could just make it. Sadly I was wrong and I ran out of juice with less than 0.5km to go, and at least I had nearly done all the uphill. We handed our bikes back to the rental shop, and no sooner had we done so the Heavens opened. Meteo Swiss was spot on with the timing like everything else in Switzerland.

We certainly loved our E-bike experience and it is the perfect way to explore the mountains. I am back in Klosters at the end of September and am looking forward to a proper ride around the vineyards, and I have my eye on a couple of other mountain tours too. Who knows, PT Cycle might be just around the corner! 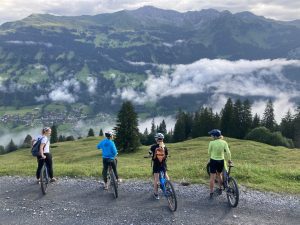 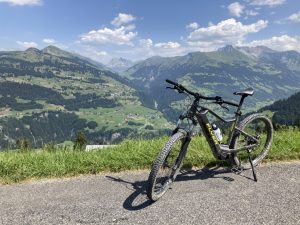